Since the use of smoke signals, humans have continually sought to improve long-distance communication. With the advent of the telephone patent in 1876, followed 60 years later by the first public two-way ‘videophone’ in Germany, technology has become the central component in the quest for long-distance communication. Read on to learn how communication in the 21st century has transitioned to a complicated mélange of digital signals connecting humans across the globe.

Gooseneck microphones are good for amplifying a single individual, while boundary and ceiling-mounted microphones will pick up more than one participant in the room. In smaller conferencing spaces, speakers are typically installed near the display so that the sound reaches the listeners from the same direction they are looking. Larger spaces will require additional audio support for proper coverage of the room. Care must be taken, however, with microphone and speaker placement to avoid poor speech intelligibility, feedback and echo.

Proper cameras and video displays  are also critical to conferencing technology. Rooms with a single table usually require only one camera, whereas larger rooms such as auditoriums and lecture halls often have one camera for the presenter and one camera for the audience. For standard-sized rooms, both the camera and the display are typically located on the narrow wall to maximize the number of participants that can see and be seen.

In general for all rooms, the displays for the conferencing spaces should be set up near the camera so that all participants of the conference perceive each other in a similar manner.

The development of high speed digital networks used to transmit the conferencing data around the world has allowed for improved quality and access. Provided that the local network backbone can support the needed bandwidth, conference participants can have the use of external media such as PowerPoint or High Definition video clips, in addition to the live audio and video information already being transmitted. The codec is a combination of hardware and software that encodes and compresses the audio and video signals before transmission, and then decodes the data again upon reception. This allows participants to see and hear each other in real time.

With the ease and accessibility of contemporary conferencing technology, more and more industries are pushing the limits of its possibilities. The education industry is increasingly using distance learning and the medical field uses conferencing for long-distance diagnosis, consultation and transmission of images. A 21st century conferencing space with a properly installed audio and video system will help clarify the haze of outdated smoke signal communications while facilitating more productive interactions. 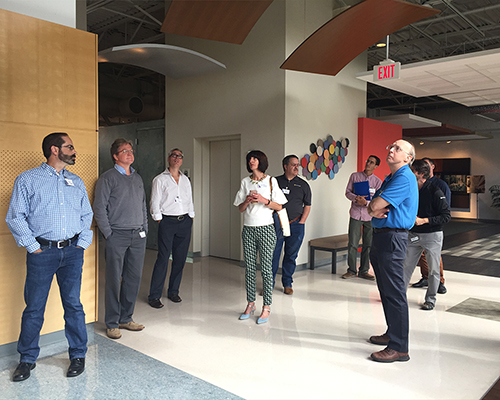 A group of us ventured out to the world headquarters of Armstrong in Lancaster, PA for the Acoustical Society of America Philadelphia Chapter Fall Meeting. There was a good group on hand and we were given a tour of Armstrong’s […]