Last September, as schools around the country were getting back into action, we enlightened you with three facts on the weird side of acoustics. We found it only fitting to reenter the world of acoustical weirdness and educate you on a few more oddities one last time before schools shut their doors for the summer.

Weird Fact 4: Ever wonder how a Bond villain could hide their underwater lair?
Maybe they would steal knowledge from researchers at Duke University who have recently invented an acoustical cloaking device. In essence, when their acoustically-cloaked pyramid is positioned in a sound field, the sound waves act as though the pyramid isn’t there at all including anything located inside. The pyramid works by altering the trajectory of the sound waves incident upon it to mimic sound waves that would hit the flat surface beneath. Also, the speed of the waves must be slowed down so that they reach the receiver at a similar time to that of a wave without the pyramid. Small holes are located throughout the pyramid to assist in altering the waves to achieve these results. Bond villains are not the only ones who could benefit from the technology; architects could use the cloak in auditorium and concert hall design.  Suppose you had a stubborn beam that affected the propagation of sound in a negative way. Why not just cloak it so sound thinks it’s not even there?

Weird Fact 5: You would never want to acoustically camouflage the end result of this next weird acoustics fact.
Ben and Jerry’s Ice Cream with the guidance of Penn State University researchers and professors, some of whom helped educate at least one of the talented consultants at Metropolitan Acoustics, have developed a freezer that runs on sound. Putting theories from the field of thermoacoustics into practice, the device utilizes a speaker that cools air by blasting a 190 decibel note. That’s almost as loud as the pistol shrimp’s claw snap from the last edition of Let’s Get Weird. The expansion and compression of the sound wave creates pockets of cold and warm air. The trick is to isolate the cold air so that your pint of Cherry Garcia keeps from melting. The developers have also invented systems that isolate the warm air, resulting in thermoacoustic stoves and engines. Right now the devices are too expensive to market; however, they offer heating and cooling without the chemicals and high energy use of traditional methods. Researchers hope to have an economical version out in the future.

Weird Fact 6: A whole new way to gather information from the web.
Spiders actually analyze the vibrations that travel along their webs. They are able to gather information such as what kind of prey has been caught and whether or not a mate is up to snuff. The eight-leggers also pluck the strings of their web like a guitar and listen to the result. Anything that sounds a little off can mean a structural deficiency in the web, in which case the spider would immediately get to work on a little house renovation. It almost sounds like the spider is doing a Metropolitan Acoustics micro-vibration monitoring test.

That’s all for this edition of Let’s Get Weird. We hope you enjoy your summer; hopefully, you get a chance to beat the heat with a scoop of acoustically frozen ice cream. 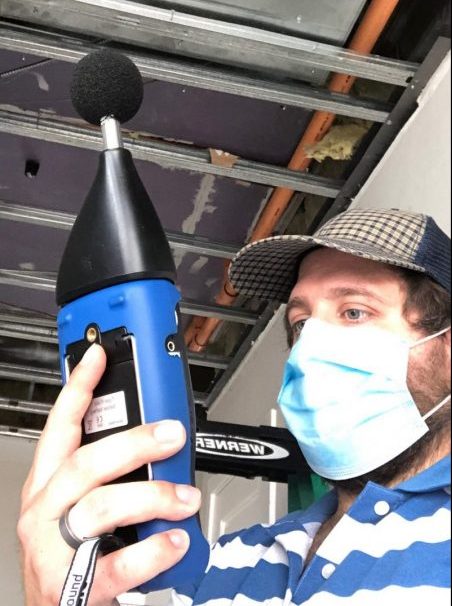 We are weathering the storms and enjoying getting out for some site work.  If these two pictures shown below of the same Philadelphia skyline are any indication – we say these darker days are behind us!  As Willie Nelson sings […]