As acoustical consultants, we often find ourselves doing a lot of explaining: explaining methods, explaining results, explaining terms. In our visual society, simply talking about sound is difficult due to the lack of a well-defined, commonly used dictionary of terms. If you can list five terms in less than five minutes used to describe sound that are not borrowed from other senses and are not onomatopoeic, you’re probably an acoustical consultant. If you can’t, you’re probably a well-adjusted, productive member of society. Read on to learn more about the art of capturing sound, acoustically speaking.

Sound is motion
Sound is defined as “oscillation in pressure, stress, particle displacement, particle velocity, etc., propagated in a medium with internal forces” (ANSI S1.1-2013); in other words, sound is “stuff” moving. This “stuff” or medium can be molecules of gas such as air, the atoms in a steel beam, or the molecules of water in the ocean. The motions within the medium become audible when they are converted to nervous impulses in your brain. That process is a textbook unto itself, but suffice to say it is responsible for the perceived beauty of a bird’s song or the bothersome intrusion of a loud neighbor.

“Soundproof” is a myth
Referring to a room as “soundproof” implies that a room will prevent any sound from entering or leaving it.  To create a wall that is “soundproof” is to create an immovable object, both on a macro- and microscopic scale. Much like a perpetual motion machine, this ideal is impossible to achieve. Acousticians use the term “sound transmission loss” to describe the ability of an assembly to reduce sound, although this term is decidedly less catchy. Transmission loss is most useful when expressed over octave or one-third octave bands, but can also be expressed as a single number Sound Transmission Class (STC). STC and its impact sound counterpart, Impact Isolation Class (IIC), are the primary metrics used to describe sound transmission.

Fiberglass is awesome
Fiberglass is a remarkable product. When used as insulation inside a wall assembly, fiberglass batt insulation itself does not act to block sound; mass is the crucial component in this regard. Instead, fiberglass helps to absorb resonances within the wall itself and thereby increases the effectiveness of the assembly. Counter intuitively, the less dense the batt insulation, the more effective it is at this function; as the density of batt is increased, it becomes increasingly rigid and transmits sound more efficiently. Once you move this fiberglass outside of a wall cavity and onto the surface of the wall, it no longer provides any benefit in terms of sound isolation.  It does, however, provide a benefit in terms of sound absorption by converting sound energy into heat, and lowers the common acoustical metric called “reverberation time”. This quantity, measured in seconds, describes the length of time necessary for a sound to decay to inaudibility. In short, using acoustic panels on a wall does not improve the isolation that wall provides.

So, challenge your family at the Thanksgiving table to list all the words they can think of that describe sound.  For starters, use these words for a (turkey) leg up: loud, quiet, silent, cacophonous, thunderous, sonorous, tinny, bass-y, treble-y, deafening, melodic, reverberant, and echoing. It’s tough, right? And that was in less than five minutes – we must be acoustical consultants! 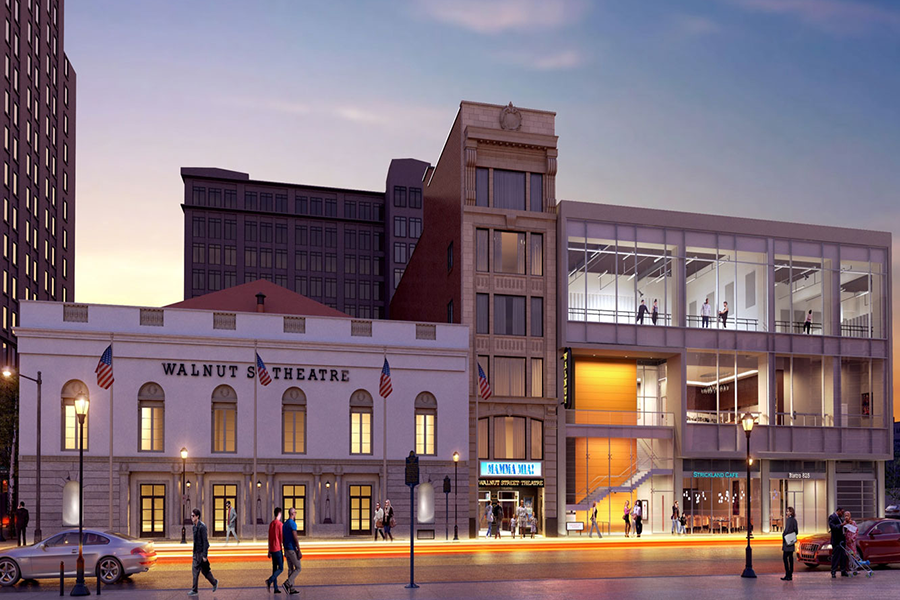 The Walnut Street Theatre has been a Philadelphia tradition since 1809 – providing theater-goers with live entertainment in its historic main theater space, as well as two additional smaller studios on the upper levels. In May 2019, the organization announced […]