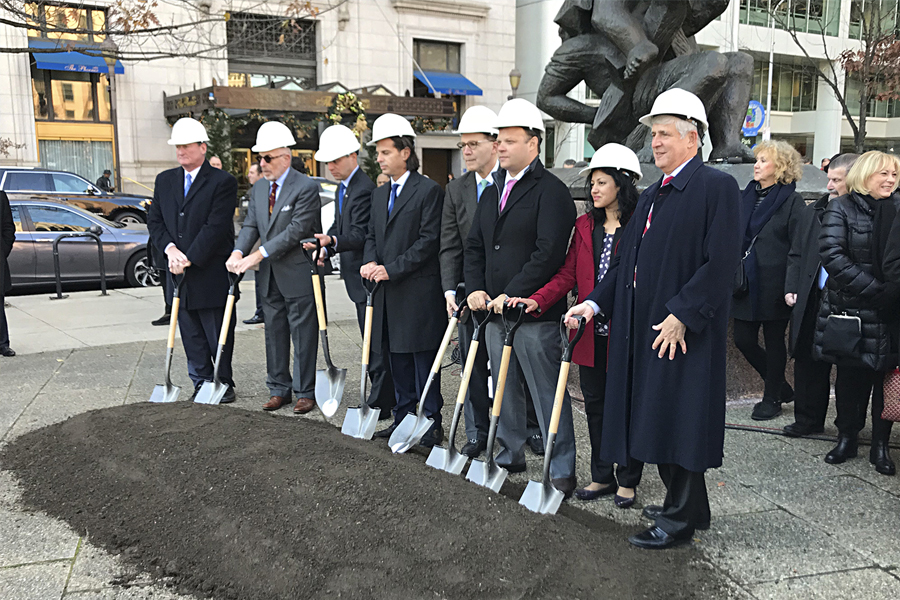 It isn’t one of our biggest projects, but it’s definitely one of our most significant. We are on the design team for The Philadelphia Holocaust Memorial Plaza, and on November 28th, on a gorgeous fall day in Philadelphia we were fortunate to be able to attend the groundbreaking ceremony for this important project. Philadelphia Mayor Jim Kenney offered some inspiring words, as did Attorney General Josh Shapiro and several other dignitaries.  The project is being funded by the Philadelphia Holocaust Remembrance Foundation. It features Six Pillars, concentration camp train tracks, a tree grove, the Theresienstadt Tree, a remembrance wall, and an eternal flame. In 1964, a group of Holocaust survivors, prominent businesspersons, and community leaders donated the monument that has stood on the site ever since. It will remain and be integrated into the features of the new plaza.

The groundbreaking ceremony was featured on several local news channels including NBC10. Click here to see the coverage.

Please do yourself a favor and watch this moving and informative video about the project.

On Thursday, October 27th, Metropolitan Acoustics was recognized at the Philadelphia 100’s Awards Ceremony as one of the region’s top emerging companies for the second year in a row. Felicia, Bryan, Graham, Mary, Paul, Scott and Sooch were all in attendance […]