After traveling to the Pacific Northwest for the Acoustical Society of America conference this month, we were inspired by the Orcinus Orca or more commonly known as Orca or Killer Whale. These magnificent mammals, which grow up to 32 ft in length and live up to 80 years, rely on sound to navigate, communicate, and hunt in the dark murky waters in which they live. Read on to learn how these ocean creatures use sound in interesting ways.

Sound travels almost five times faster in water than in air at approximately 4920 ft/s vs. 1130 ft/s. Killer whales use this to their advantage. To communicate and navigate, they produce clicks, jaw claps, whistles, pulsed calls, and low-frequency pops by moving air between nasal sacs in the blowhole region. Pulsed calls are the most common vocalization, which are believed to be used for group recognition and to coordinate behavior of the pod. They range in frequency from 500 to 25,000 Hz with peak energy between 1000 to 6000 Hz. For reference, human hearing ranges from 20 to 20,000 Hz. Orca also use whistles for close-range communication, which are high-pitched and directional and do not travel far distances. As a matter of fact, humans do that, too! Check out this link to hear Orcas communicating.

Orca pods have different dialects depending on their geographic location. According to marine biologists, no two pods share the exact same dialect. Pods may share some portions of their dialect that are the same or related, but each pod remains distinct enough that they can be individually identified. Orca that are separated by great geographical distances have completely different dialects and may not produce any of the same sounds, much like humans on opposite sides of the globe!

In addition to communication, Orca use sound to navigate and hunt via echolocation. To echolocate, Orca produce directional clicks in rapid succession, called a train, where each click lasts less than one millisecond. Orcas produce different frequency peaks for their clicks depending on their environment and geographic location. One study suggested that these clicks include frequencies between 20,000 to 60,000 Hz, above the range of human hearing. The click trains pass through the rounded region of an Orca’s forehead and focus into a beam, which is projected into water. These sound waves bounce off objects in the water, and the reflections return to the Orca. The Orca receives and conducts these echoes through the lower jaw to the middle ear, inner ear, and then to hearing centers in their brain via the auditory nerve. The echolocation enables the Orca to determine the size, shape, structure, composition, speed, and direction of an object. This process is vital to Orca because they typically navigate in waters that do not have light or good visibility. This sounds similar to how our sonar works.

As you can see, there are many similarities between Orca and humans in the way we communicate, navigate and localize objects. If you are so lucky as to see these grand mammals on an expedition, try a little whistle shout-out to them! 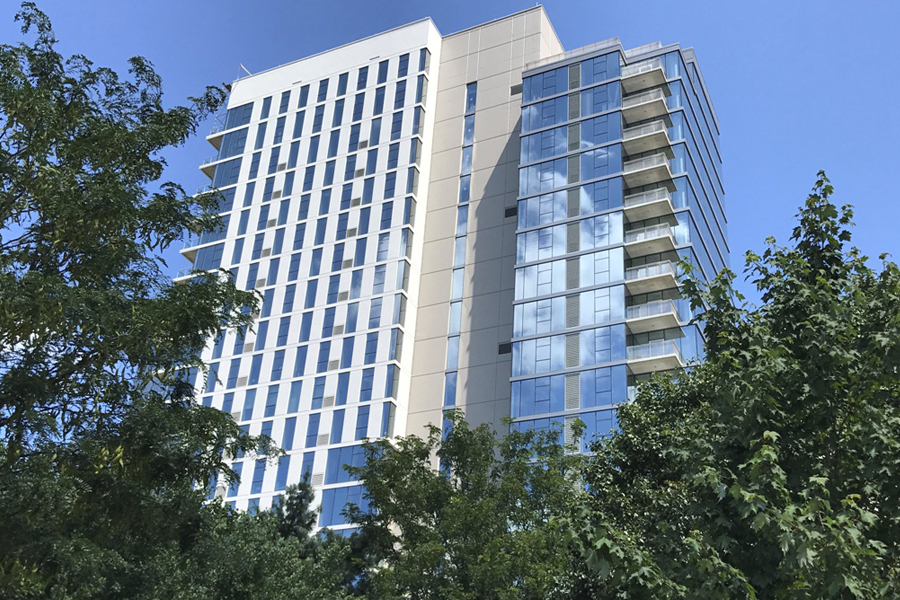 An esteemed group which included politicians, city planners, a performing tai chi artist, and Metropolitan Acoustics’ own Felicia Doggett was on hand at the ribbon cutting ceremony for One Riverside on May 2nd. The 22-story condo building on the banks of […]