Have you ever noticed how the soundtrack to a movie can elevate the emotion and overall mood of a particular scene?  Even silence has a purpose.  For scary movies, it is all about building tension and catching your ears off guard.  As Halloween approaches, you will be flooded with these acoustical stimuli on your ears – from an eerie backing track to a piercing shriek – which have foundations rooted in physics; that may be the scariest part of all!

Why humans hear some sounds as enjoyable (consonance) and others less enjoyable (dissonance) has been debated for thousands of years.  Music and math can shine some light on the debate.  In music, consonance and dissonance depends on the ratio between frequencies, whether played simultaneously or in sequence.

Many accounts of consonance begin with the Greek mathematician and philosopher Pythagoras.  He found that plucked strings whose lengths were related by ratios of small integers were pleasing, such as 2:1 (an octave), 3:2 (a perfect fifth), and 4:3 (a perfect fourth).  As studies continued, it was found that harsh or displeasing intervals had ratios of larger integers, e.g., 10:9 (minor second), 7:5 (a tritone), and 15:8 (a major seventh).  A progression of frequency ratios from simple to complex results in a perception change from consonance to dissonance.

In conventional music, it is generally found that a shift from dissonance to consonance gives the listener a feeling of comfort and resolution: building tension then providing release.  In some of the more haunting and unsettling scores of music, the melody and chord structure remain dissonant and brooding throughout.  A prime example is the Jaws theme, which utilizes a collection of minor seconds (complicated ratio of 10:9) that shift up and down.  The theme from the film Halloween gets arguably more spooky by incorporating some of the other more complicated ratios in the main melody, such as 192:125, a classic diminished sixth, while many other different and unrelated intervals are happening simultaneously.

One interpretation regarding the human response to consonance and dissonance is that our brains look for simple relationships.  The more complicated a relationship between notes is, the harder the brain has to work to process the signal, and the less desirable the stimuli seems.  This also comes into play with notes that are out of tune or not the same exact frequency.  The closer a frequency is to another that is playing simultaneously, the smoother the response.  As the frequencies begin to gradually differ, constructive and deconstructive interference occur causing a rapid “beating”. This is why it is so important that members of an orchestra tune to each other.

So, the next time you hear the dissonance music in your favorite Halloween movie, remember that it is just an acoustical technique used to get you in the spooky mood. 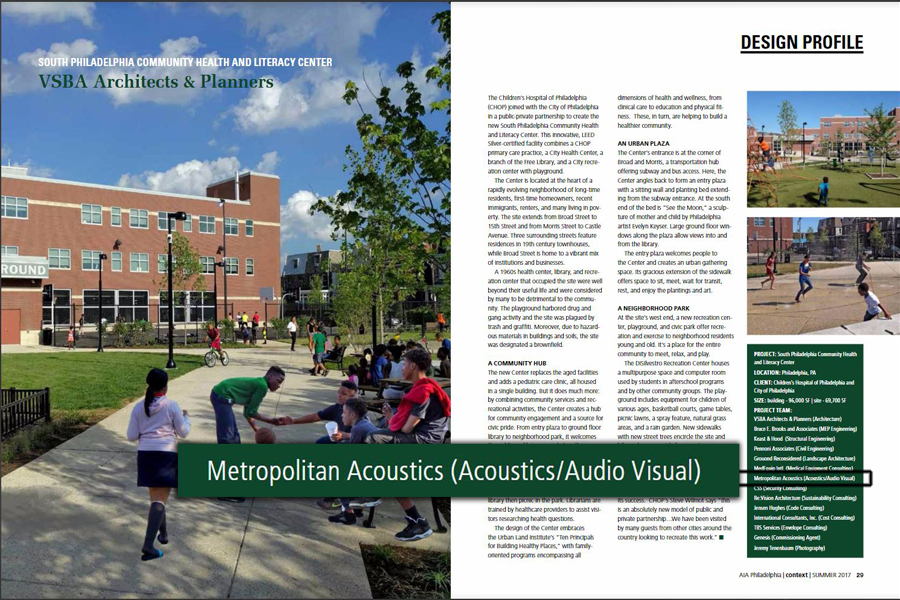 The Summer 2017 issue of Context Magazine, an AIA Philadelphia publication, features a transformative project that we worked on with VSBA Architects. The Design Profile starts on page 28 and details the  unique collaboration between  the public and private sectors […]