The 2021 Preservation Achievement Awards were held June 9th.  This marked the 25th anniversary of this award program which  honors individuals, organizations, organizations, businesses and projects throughout Greater Philadelphia that exemplify outstanding achievement in historic preservation.  The ceremony was held virtually again this year.  Metropolitan was proud to sponsor the program and to be part of several design teams that received awards.  Those projects are:

Silverman Hall was designed by Cope and Stewardson in 1900. Penn Law sought to transform three outdated and underutilized large classrooms into high-functioning environments. Part of the Penn School of Law for over 115 years, the design required sensitivity to the grandeur and character of the classroom spaces with vaulted ceilings, original plaster and original windows. Of concern was the speech intelligibility stemming from the existing room properties and heavy ambient noise from the surrounding streets. Metropolitan Acoustics was brought in as the acoustical consultant to evaluate the interior room acoustics and the exterior-to-interior sound isolation for these classrooms.

Located on Drexel University’s campus, this project involved the renovation of the historic Philadelphia Armory into a world-class facility for US Squash.   Originally home to the PA National Guard, the massive building was designed in 1916 for guard training.  Metropolitan Acoustics provided complete acoustical consultation for the building transformation into this innovative facility.  Our services included interior room acoustics, acoustical isolation, mechanical system noise/vibration control, and full construction administrative services.

The Specter Center will feature eighteen singles courts—including two all-glass exhibition courts—and two doubles courts, U.S. Squash Hall of Fame, Learning & Innovation Center, training and educational rooms for the athletes, and administrative offices.  This marks the first permanent home for US Squash and brings together the entire squash community—from team USA athletes to current amateur players.  Arlen Specter was an American lawyer, author and politician who served as a United States Senator from Pennsylvania from 1981 to 2011.

This 14-story building a block of north city hall dates to 1899, and originally was headquarters of the United Gas Improvement Company.  It is also steps from a Philadelphia favorite – the Reading Terminal Market!  This building was converted from its most recent use of Philadelphia Court Offices to modern apartments with views, amenities, and location, location location! Metropolitan Acoustics provided consultation on impact and sound transmission between floors to ensure conformance to requirements in a residential building. Additionally, we provided services associated with an existing rooftop cooling tower to understand the acoustical options and constraints in relation to the City of Philadelphia Noise Ordinance.

This iconic Beaux-Arts style 13-story building was built by the Girard Estate in 1896.  It housed the offices of the Board of City Trusts who managed Girard’s wealth. No expense was spared for the building, constructed of grey brick, terra cotta, and Indiana limestone.

The $80 million renovation to the 123-year-old Stephen Girard Building is now complete, and is home to  Canopy, a boutique Hilton Hotel.  Care was taken during the renovation to restore the architectural elements – classical cornices, pediments, and sculptural caryatids, as well as the recreation of original storefronts.  Metropolitan Acoustics provided full consulting services for this renovation from the schematic design phase through to construction administration.

The hotel is part of the East Market, a mixed-use, multi-phase redevelopment project encompassing an entire city block in the heart of Center City.  Stephen Girard (1750-1831) was born in France and settled in Philadelphia becoming a man of great wealth as a merchant, banker, and philanthropist.

Congratulations to all winners!  Here is a link to the program book.

AIA 2021 Design Awards
And the winner is? 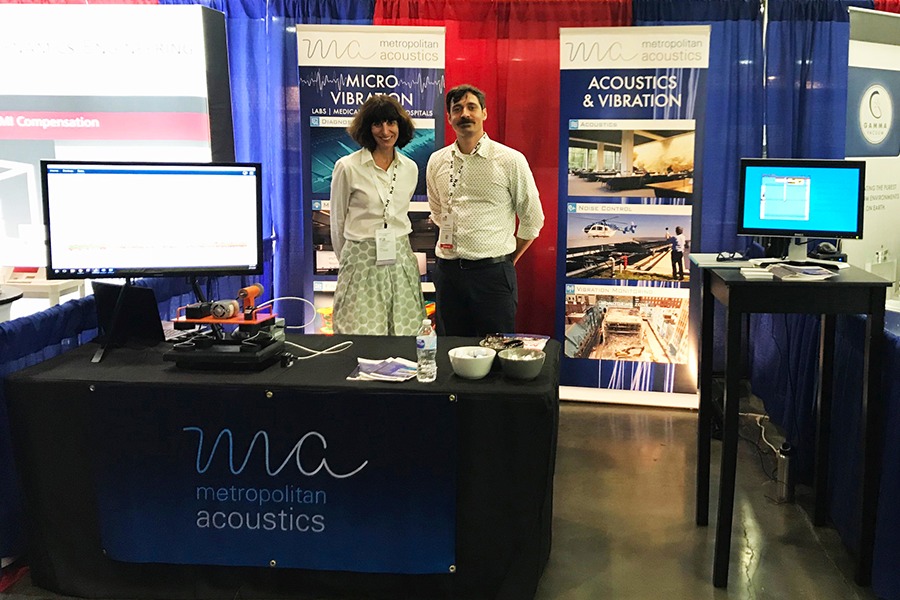 Metropolitan Acoustics would like to send out a huge thank you to Microscopy Society of America, the Microanalysis Society, and the Microscopical Society of Canada for hosting the 2018 M&M Conference! We were very fortunate to be able to […]