The effects of vibration in buildings and other structures are well catalogued – from interfering with the calibration of lab equipment to catastrophic collapse. However, vibration can affect more than just buildings in harmful ways; prolonged exposure to vibration can cause numerous issues in people as well. Read on to learn more about building vibration and its effects on people.

Whole Body Vibration (WBV) is a term used when vibration is transferred to the human body. Humans are sensitive to vibrations from below 1 Hz up to 100 Hz. Lower frequencies of vibration lead to human motion sickness while higher frequencies can lead to general annoyance and discomfort. WBV can contribute to a bevy of conditions including:

Building vibration, leading to WBV, can enter structures in multiple ways. Rotating and vibrating equipment can transmit low frequency vibration into buildings with ease if not properly isolated, which can propagate through the structure to an occupied space, possibly causing WBV to the occupants. Metropolitan Acoustics has worked on projects in the past where vibration created by the unit was strong enough to cause objects in adjacent spaces to move, disrupting office workers.  The culprit?  Commercial washing machines with no vibration isolation.

Another example of WBV that we worked on involved a boardroom table in an office building that was vibrating noticeably and creating annoyance for people sitting at the table. The offending equipment was on the roof above and the vibration was transferring into the structure. Although the floor vibration was not perceptible, the table was lighter in weight and its resonant frequency aligned with the forcing frequency of the equipment. The solution – add mass to the table to change the resonant frequency. In addition to equipment causing vibration, structural properties in buildings can also lead to WBV. For example, tall buildings are designed to sway in the wind, with the movement more pronounced on the highest floors. This building movement is known to cause motion sickness in certain people.  Read more about this in our  October 2018 newsletter.

Complaints of ramps at the Philadelphia Eagles’ Lincoln Financial Field when it was first built were common. Eagles’ fans said that the ramps swayed like the deck of a cruise ship as the surging crowds exited the stadium. Structurally, these ramps were perfectly safe. However, a phenomenon known as synchronous lateral excitation was the issue and occurred when large crowds of people walked on the ramps; vibration resulting from the foot falls of the crowd caused lateral movement. The WBV reportedly made people feel nauseous and unsafe. Additional bracing was added to the ramps to mitigate the issue.

Vibration may not be indicative of structural problems relating to the safety of building occupants, but it can still impact the productivity and overall well-being of people.  After 2020, we just deserve some “good good good good vibrations”! 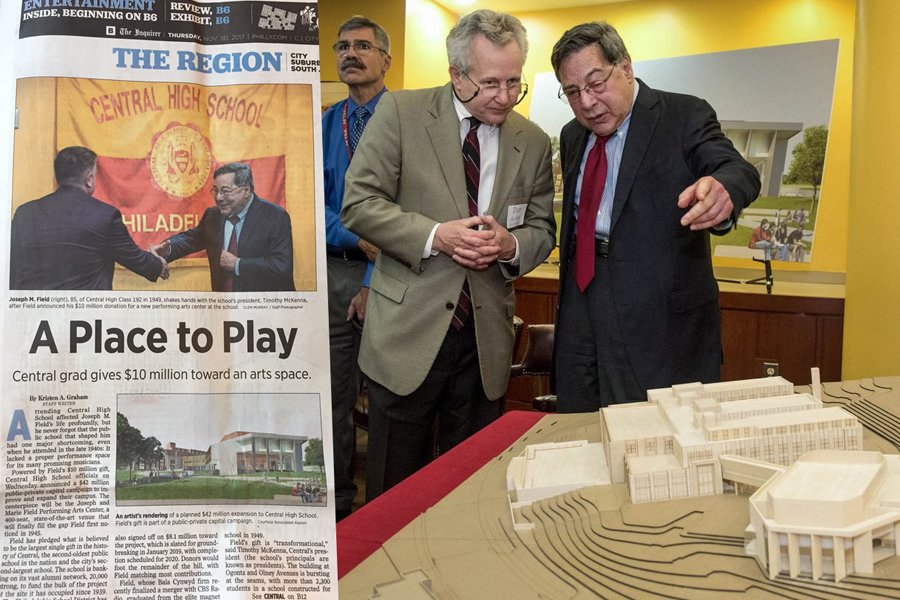 At another ceremony attending by and featuring remarks by Philadelphia Mayor Jim Kenney, a $10 million donation by Central grad Joseph M. Field was announced for one of our project collaborations. Mr. Field is donating the money towards a new […]