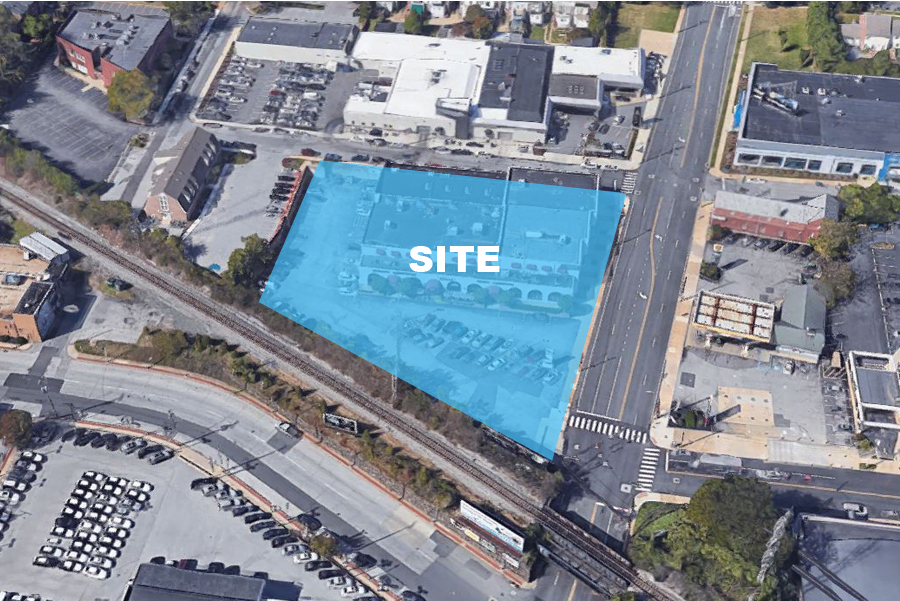 2000 Pennsylvania Avenue is a 6-story residential building in Wilmington, DE is that will include an underground concrete parking structure. Sound and vibration from passenger and freight trains that run adjacent to the property approximately 25 ft. from the building was an issue of concern. We were hired to monitor vibration coming from the passing trains at multiple locations on the site. Structural vibrations caused by an exterior source generally enter the building envelope via ground-borne vibrations acting on soil/foundation interfaces or façade vibrations due to loud sound pressures. These symptoms are very typical of a freight train passing very close to a building.

The rail line is directly below the proposed building site outlined in red below:

We provided long-term vibration monitoring at four locations between the rail line and the site using tri-axial accelerometers to record the effects of trains passing along the property line. Data from the accelerometers was wirelessly transmitted to a gateway and pushed via the internet to a cloud where it was filtered. We discovered ground-borne vibration levels that were very high and the levels we recorded on the various locations on site were cause for concern as well.

While there are no solutions for reducing the vibrations coming from the train and the rail lines themselves, we were able to provide recommendations for mitigating the transmission of vibration into the proposed building. Isolating the floors from the base building slab and using low-profile spring isolators installed directly onto the deck are some of the initial basic strategies for combatting vibration in the building structure. We also provided guidelines and specific materials and construction methods which will further isolate the building structure from the occupied spaces within.