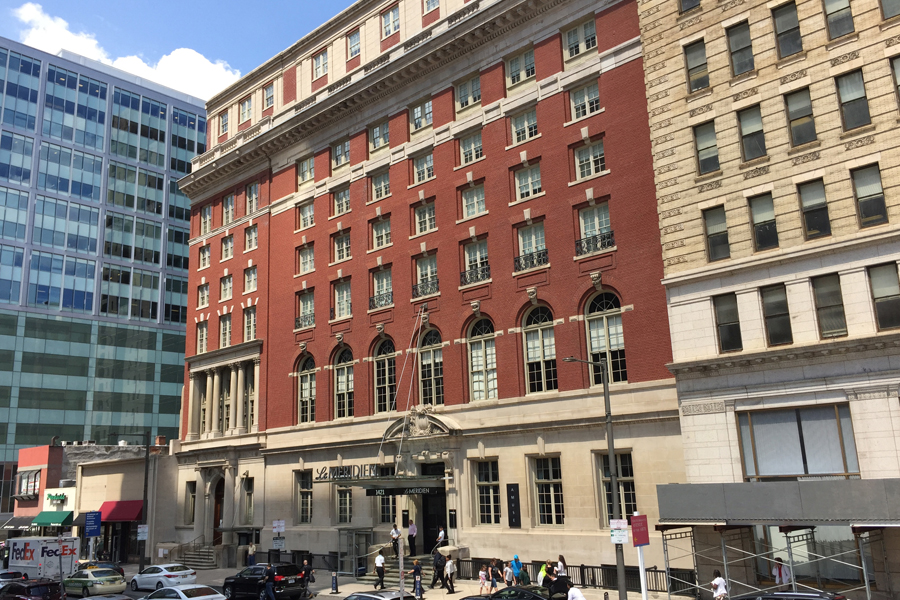 Located just steps away from the Philadelphia Convention Center and City Hall in the heart of Philadelphia’s thriving Center City district, the Le Méridien Philadelphia provides easy access to some of the city’s best shopping, museums, and famous attractions. The 10-story Georgian revival-style building was originally a YMCA and was renovated from the ground up into a modern yet sophisticated hotel in 2010 which features 202 guestrooms, a 75-foot central atrium, and a restaurant.

During the design phase of the renovations, Metropolitan Acoustics was brought in to provide analysis of the interior partitions and floor/ceiling assemblies to provide guidelines and construction recommendations for reducing the sound transmission between the guestrooms and public spaces. Of particular concern were the rooms in close proximity to the ballroom and those rooms that were near the mechanical and elevator systems. We also addressed sound isolation concerns between the guest rooms and between the rooms and the public corridors.

During construction, we tested the sound levels on-site between rooms and between the wall partitions and the mechanical systems. The results were as expected. The sound-reduction methods used in this renovation proved successful in providing the desired level of privacy within the guestrooms and eliminated the anticipated level of sound transmission from the elevators and mechanical systems. A full interior renovation such as this is an opportunity to properly analyze and address acoustic and sound isolation issues throughout the entire project. This is an example of how the proper approach and expectations were clearly defined at the beginning and resulted in success at the end.

Rooftop units (RTUs) can be appealing HVAC systems due to their ability to save space within the building and their comparatively low up-front cost. Sounds like a good idea, right? Here’s the catch: RTUs generate high levels of noise and […]