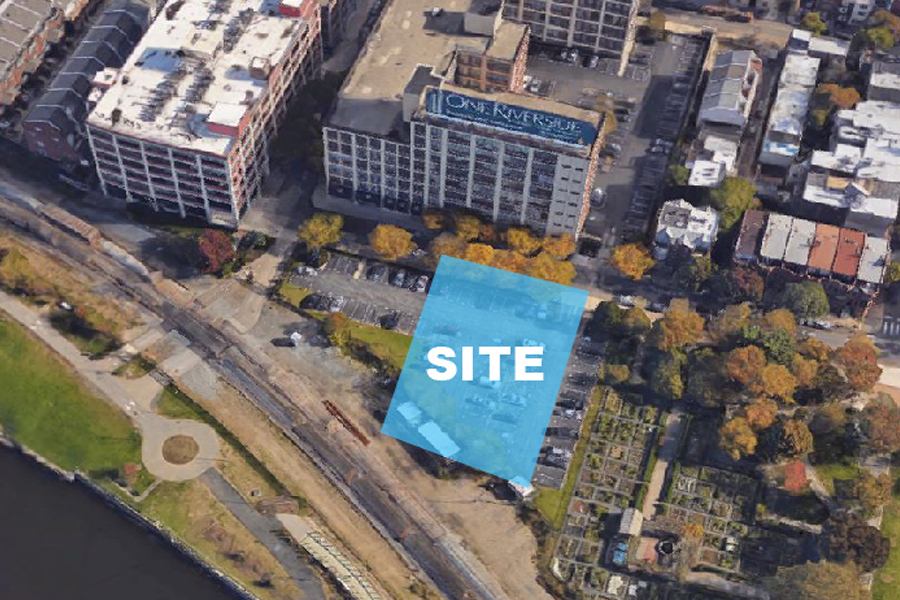 One Riverside, a 22-story condo building on the banks of the Schuylkill River in Philadelphia was the first high-rise condominium project to be completed and opened in the city in almost seven years. Located just steps from the Schuylkill River Park and Trail in a beautiful residential neighborhood on the western edge of Center City, the location is ideal for a new condominium building, but its location in relation to other existing buildings necessitated vibration monitoring during potentially damage-causing construction activities. Metropolitan Acoustics was hired to monitor several locations on the eastern edge of the site throughout the stages of construction that were determined to have the potential to cause vibration.

We installed wireless sensors directly onto the buildings as well as a wireless gateway on one of the buildings that collected data from each sensor and pushed it to a server via the internet. A series of Baseline Vibration Thresholds (BVT) for each sensor were established representing typical levels of ambient vibrations of each building. The BVTs included the environment, position of each sensor in relation to the construction site, and the average ambient daytime noise at that position. Baseline vibration measurements were taken in the evenings and on weekends to document the existing conditions of ambient vibration outside of periods of construction.

Prior to construction, vibration thresholds were established which, if exceeded, would trigger alerts to be sent in real time to the contractors on site. The maximum threshold peaks were defined at levels which would not pose any risk in terms of structural damage, so if the system sent out an alert it would be preventative, not a report of vibration that was causing damage.

Throughout the duration of our vibration monitoring on this project, there were several occurrences where construction activities reached levels which triggered automatic alerts. This allowed the contractors to adjust their activities on site to prevent damage to any of the surrounding structures. Long-term vibration monitoring and our system’s ability to send out alerts in real time meant that all the proper measures were in place to protect against any potential issues of damage liability.

Are you eavesdropping on your coworkers? Are sounds from the office copier driving you nuts? Open office spaces are taking over the corporate landscape with their enticing benefits: a more collaborative working environment, flexible layouts, and lower construction costs.  But […]